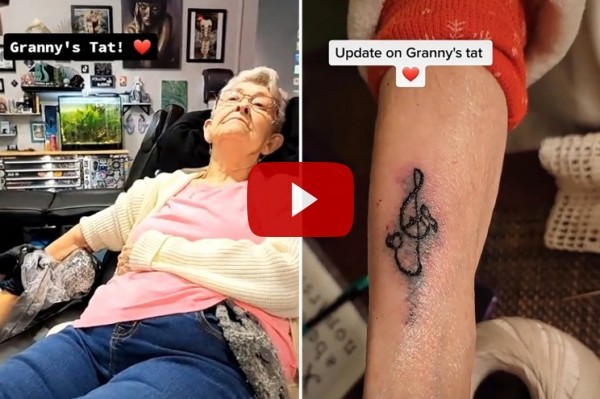 An 82-year-old grandma recently got her first tattoo, going viral on TikTok in the process.

Judy Dede’s granddaughter, Brandy O’Reilly, couldn’t believe her ears when Dede announced she wanted a tattoo. O’Reilly asked her grandma to repeat herself for a quick TikTok video. Shortly after, the video went viral with almost 4 million views, and a hashtag dedicated to Dede — “tat granny.”

Dede said she decided to get a tattoo on a whim after reading an article by a woman her age, advising readers to live life to the fullest.

“I read an article and it just blew me away. And that’s when I said, ‘You know what, I’m living each day as best I can because you never know what tomorrow is going to bring,'” Dede said during an interview with Fox News.

“We had been shopping and had just stopped to go to the grocery store and I said, ‘Shut off the car. I’m going to blow your mind. I want to get a tattoo.’ They were stunned.”

Though it was an impromptu decision, Dede waited 15 days to decide what she wanted. During that period, some of her family members decided to get in on the ink.

O’Reilly continued: “My mother, myself, my wife and my two daughters-in–law got tattoos as well. My 10-year-old even participated and had a Sharpie tattoo drawn on his arm, so he could be a part of Granny’s big day.”

Dede chose a treble clef for her tattoo design, featuring a fish hook, a ribbon, and a heart on her right forearm.

“The music note was all-encompassing for our whole family,” Dede said. “We’re all a bit musically inclined. Starting with my mother who wrote music and she sang a lot. And I’ve just been that way my whole life. I just love to sing and dance.”

When asked about her newfound fans, Dede said she’s “speechless.”

“I never in my wildest dreams could have imagined that this would occur. And now I’m finding out I’ve even been an inspiration to some on TikTok,” Dede said. “It’s just snowballed from there.”