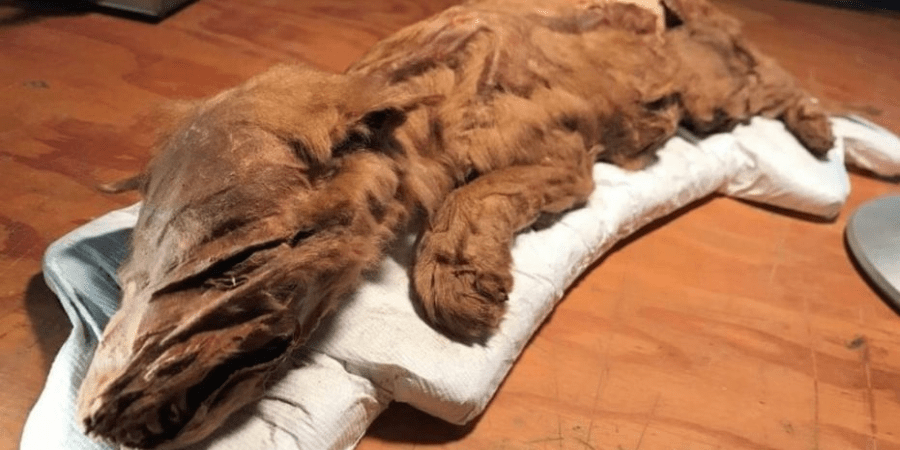 In 2016, two amazingly well-preserved ice age mammals were found by miners in northwest Canada. Gold miners found the remains in the melting permafrost of the Yukon territory. A ceremony held on Thursday unveiled the wolf pup and caribou calf.

A local paleontologist working with the Yukon government, Grant Zazula, said: “To our knowledge, this is the only mummified ice age wolf ever found in the world.”

Reports say that the whole of the wolf pup was preserved. This includes details of the head, paws, tail, skin, and fur. On the other hand, only part of the caribou calf was preserved—its head, torso, and two front limbs.

The Guardian says that it’s extremely rare in the fossil record for fur skin and muscle tissues to be preserved. These specimens, which were carbon-dated to more than 50,000 years old, have all three.

A paleontologist at the University, Elsa Panciroli, said:  “Ice Age wolf bones are relatively common in the Yukon, but having an animal preserved with skin and fur is just exceptional – you just want to reach out and stroke it. It’s an evocative glimpse into the Ice Age world.”

The discovery is causing some excitement among researchers around the world. Both the wolf pup and caribou calf are preserved well enough to delve into the investigation of different factors of interest. These could include diet, health, age, genetics, and perhaps cause of death.

Julie Meachen, who works with Ice age mammals at the Des Moines University as a carnivore morphologist was asked by Grant to participate in the study. Meachen said she was sort of beside herself to be doing research on the wolf pup soon.

“We want to do an ancient DNA test to see who it’s related to and look at its microbiome to see if there are gut bacteria still there,” Meachen said. Type A blood could be next possible universal blood type