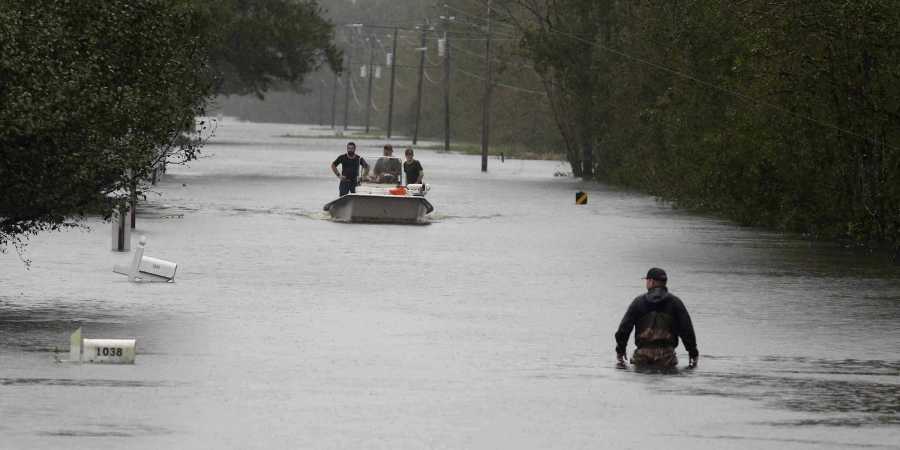 Hurricane Florence may be reclassified as a tropical depression but it is still wreaking havoc: rivers approached record levels, nearly 570,000 utility customers were without power, and the death toll rose to 17 on Sunday.

Reported fatalities include eleven in North Carolina and six in South Carolina, where a 3-month-old baby and two victims died from carbon monoxide poisoning.

Florence stalled over the Carolinas and is expected to pour up to eight more inches of rain in some areas, dousing parts of southeastern North Carolina with up to 40 inches before the rain ends this week.

The National Hurricane Center warned of flash flooding and significant river flooding in parts of the Eastern Seaboard, as well as possible landslides in western North Carolina and far southwest Virginia. Swansboro, North Carolina, was awash in 34 inches of rain as of Sunday afternoon.

This is a “historic … amount of rain from one storm in North Carolina,” said National Weather Service meteorologist Bob Oravec.

By late afternoon, the storm’s winds died down to 35 mph as it passed about 25 miles southeast of Greenville, South Carolina. As it headed north at 14 mph, it is expected to bring 2-5 inches of rain to some parts of the Carolinas, the mid-Atlantic states, and southern New England.

On Sunday, New Hanover County and Wilmington officials announced that Interstate 40 and U.S. 74 were rendered inaccessible by Saturday night’s deluge.

Hundreds of people stranded in New Bern were rescued from flood-swamped homes.

People living within a mile of Fayetteville’s rivers were urged by Mayor Mitch Colvin to evacuate. According to Oravec, Cape Fear River is forecast to crest in Fayetteville early Tuesday, remain in “major” flood stage into Wednesday, then scale down to minor flooding by week’s end.

North Carolina got the heaviest rains but South Carolina was also hit with Myrtle Beach struck with more than 7 inches of rain. Rivers in South Carolina are expected to crest Monday evening into Tuesday. 84-year-old woman with dementia locked out of care facility