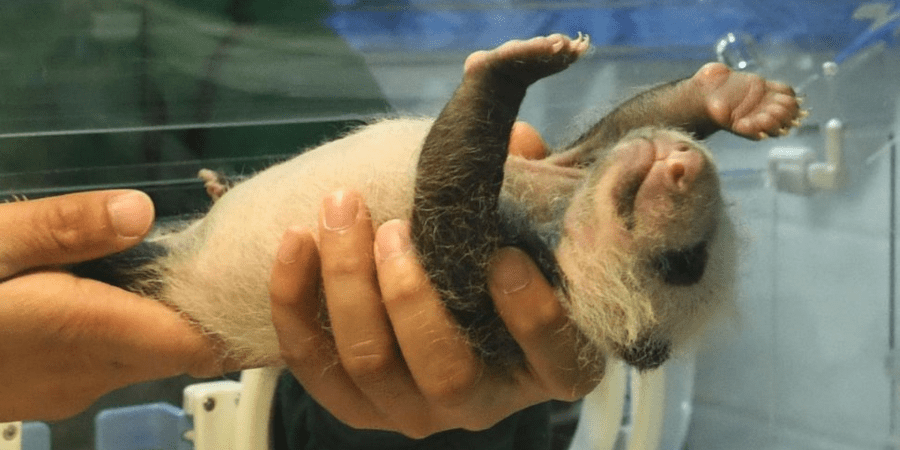 A new paper published on Dec. 2 in the Journal of Anatomy described Carnivorans as an order of mammals that usually birth young that are hairless, blind, weak, and small. This order includes all dogs, cats, raccoons, weasels, seals, and bears. Bears, in particular, have very small cubs.

Some researchers say that this may be due to hibernation. Bears may have long ago adapted to their hibernation schedule, shortening their pregnancies so they would avoid gestating during hibernation. This trait holds true for all bear species — even those that don’t hibernate, like pandas.

The new study presents a hole in the hibernation theory: even for bears, baby pandas enter the world unusually underdeveloped, pink, and tiny, as compared to other bear cubs that have mature skeletons.

Peishu Li, the lead study author and doctoral student at the University of Chicago, described Giant Panda cubs as “basically undercooked.” Though the average mammalian size ratio of mother to young is 1:26, baby pandas are born weighing around 100 grams, meaning their mothers can be 900 times larger.

Studying panda cub remains is also difficult. These are hard to come by — few are in captivity and most survive after their birth. However, in the 1980s at the Smithsonian National Zoo in Washington, D.C., their first panda couple produced five cubs that all died soon after they were born.

Along with her co-author, Duke biology professor Kathleen Smith, Li was able to study two of those preserved cubs. Using a CT scanner, they built 3D models of the cubs’ skeletons.

Comparing these with scans of other newborn bears, a dog, fox, and other animals, the researchers found that the bones of the pandas were uniquely underdeveloped and similar to the skeleton of a premature beagle puppy they studied.

As pandas struggle as a species, the authors wrote in the study that knowing why their cubs are born so underdeveloped becomes more urgent.