Kirill Tereshin has been dubbed ‘Popeye’ because of his massive biceps. The 22-year-old Russian bodybuilder’s beachball-like biceps are very unusual for his otherwise skinny frame.

Tereshin said he is seeking surgery to save his arms and trying to raise funds so he can go to the U.K. to pay for the treatment.

“I used to go to the gym for two years before being called up for military service. In the army, I was worried that I would have a hard time and lose weight so I decided to try synthol oil,” Tereshin said.

After his military service, Tereshin began to transform himself by using the oil, worrying his mom in the process.

“In the beginning, I wanted to inject synthol oil into other parts of my body, but then the problems started and I stopped using it,” he added.

When he sought medical advice earlier this year, doctors warned him that he may end up losing his arms.

Reportedly, synthol injections cause tissue fibrosis followed by necrosis. The injections affected his health seriously, his “arms are in a bad state and are reddening.” 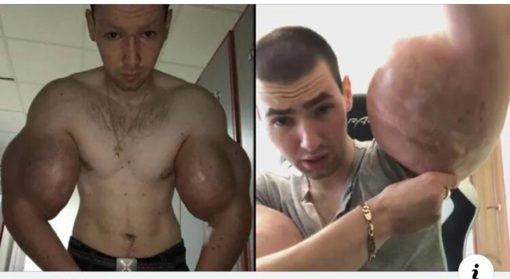 Tereshin is now trying to raise money so he can get treatment to remove the synthol oil from his arms before they are amputated.

“I have launched a fundraiser to see a doctor in Europe for treatment that costs around 3 million RUB (nearly $50,000),” ‘Popeye’ said.

Tereshin has received a lot of media attention on Instagram because of his beach-ball biceps.

“Online, many people treat me badly. In real life, they want to take photos with me,” he said. “I am known in many countries and I am sure I have fans in the UK too.”

He was engaged to Olesya Malibu but she dumped him days before they were to marry. Months after, he proposed to blogger Victoria Yakynina.

After being dumped by Malibu, Tereshin shaved off his eyebrows because he heard women were attracted by it. He also had silicon implanted into his calves because he wanted to make his legs look like “rockets”, The Sun reported.

Synthol injections, according to doctors, can cause pulmonary embolisms, nerve damage, infections, sclerosing lipogranuloma, stroke and oil-filled cysts or ulcers in the muscle.