One might recall “The Blob” —  a patch of unusually warm water that struck the west coast between 2014 and 2016.

Now, a similar massive “blob” of hot water was spotted in the Pacific Ocean near New Zealand that is headed toward South America.

A weather map from Climate Reanalyzer from the University of Maine’s Climate Change Institute showed the patch of unusually warm water in the South Pacific on Monday. 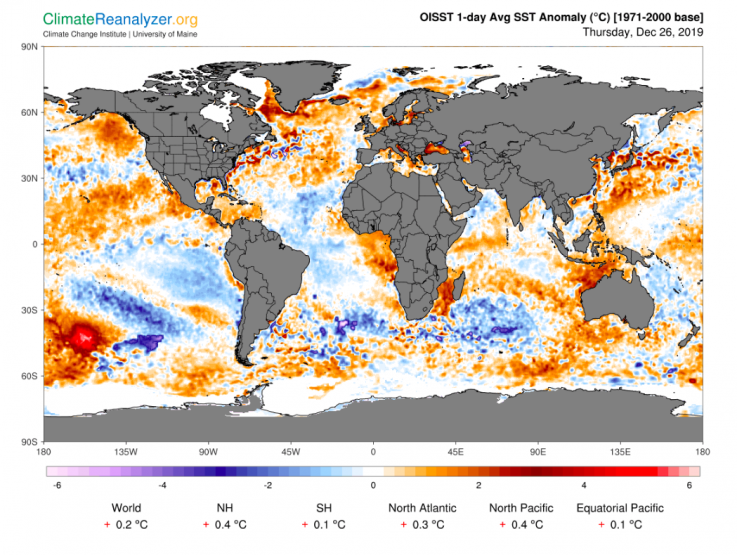 The patch is about 1.5 times the size of Texas — around one million square kilometers, The Guardian reported.

James Renwick, a professor in physical geography and weather and climate researcher at the Victoria University of Wellington, told the New Zealand Herald that the unusual phenomenon is caused by a combination of sunny skies, high pressures, and gentle winds.

Renwick explained, “Sea temperatures don’t actually vary too much and a degree [Celsius], plus or minus, is quite a big deal and this area is probably four degrees or more than that above average and that’s pretty huge.”

The center of the blob is estimated to be more than 6 degrees Celsius hotter than average — which makes it “one of the warmest spots on the planet at the moment.”

According to Climate Reanalyzer, the warm patch was moving eastward in the Pacific partway between New Zealand and southern Chile.

The unusual weather pattern, described as a marine heatwave, varies depending on geography and the time of year.

Climatologist Nick Bond from the University of Washington explained to NOAA Research that it can “either cause more heat than usual to go into the ocean, warming up the surface, or in some cases suppress the amount of heat coming out of the ocean.”

Unusual weather patterns such as these affect sea-dwelling creatures and ecosystems. According to Newsweek, which cited MarineHeatWaves.org, a heatwave that hit Western Australia in 2011 resulted in more tropical-like fish and a shift from kelp forests to seaweed turfs.

While it is still difficult to ascertain if the unusual weather event can be attributed to climate change, research suggests that the marine-based heatwaves are becoming more frequent and more intense on the back of global warming — just like land-based heatwaves.

This is also not the first marine heatwave to strike New Zealand recently. When the country had its hottest summer on record (2017/18), some of the waters around New Zealand reached about 6 to 7 degrees Celsius above average.