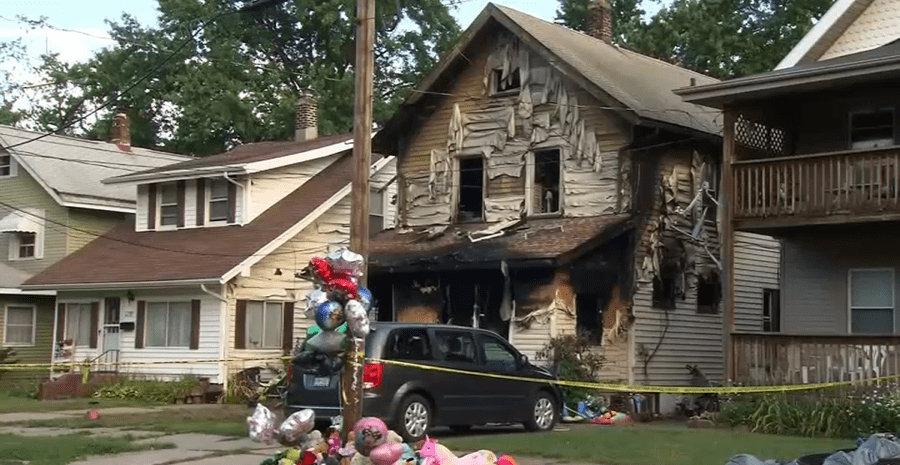 PEOPLE confirms that three children of a firefighter died in a fire that broke out at an overnight daycare early Sunday morning while he was responding to another call some blocks away.

As Luther Jones, 29, of the Lawrence Park Volunteer Fire Department, was called to check on an automatic fire alarm, a fire started at the Harris Family Day Care, a 24-hour childcare service in Erie.

Just after 1 a.m. Erie Fire Department firefighters responded to calls of a daycare fire on the 1200 block of West11th Street. Hours later, Jones learned of the tragic news that all three of his children were among the five children who died in the fire.

The four who died were siblings, identified as La’Myhia Jones, 8; Luther Jones Jr., 6; Ava Jones, 4, and 9-month-old Jaydan Augustyniak. According to their mother, Shevona Overton, three were fathered by Jones.

“I’m just so hurt my babies are gone. I just hurt inside knowing that my kids were fighting and hurting in that fire. Every minute, I feel the same pain,” Shevona told CBS affiliate WSEE.

Erie Chief Fire Inspector JohnWidomsk said the flames were bursting out of all windows on the first floor of the two-story facility when the firemen reached the scene. An Erie Fire Department spokesperson also tells PEOPLE that while two teenagers escaped through the second-story window sustaining injuries from broken glass, another neighbor who unsuccessfully tried to enter the building suffered from minor burns.

The spokesperson also said that while an electrical engineer is working to confirm the cause, the fire may possibly be due to overloaded extension cords due to the number of extension wires under the couch and carpet where the fire came from.

“I can’t imagine what that poor young man is going through,” said Lawrence Park Fire Chief Joe Crotty. “It’s hard to wrap your head around losing one child let alone three children. He’s one of us and we’re doing our best to make sure we take care of him,” Crotty tells PEOPLE.

A fund to help Jones, who has been with the department for almost a year now, has been set up by Lawrence Park fire officials.