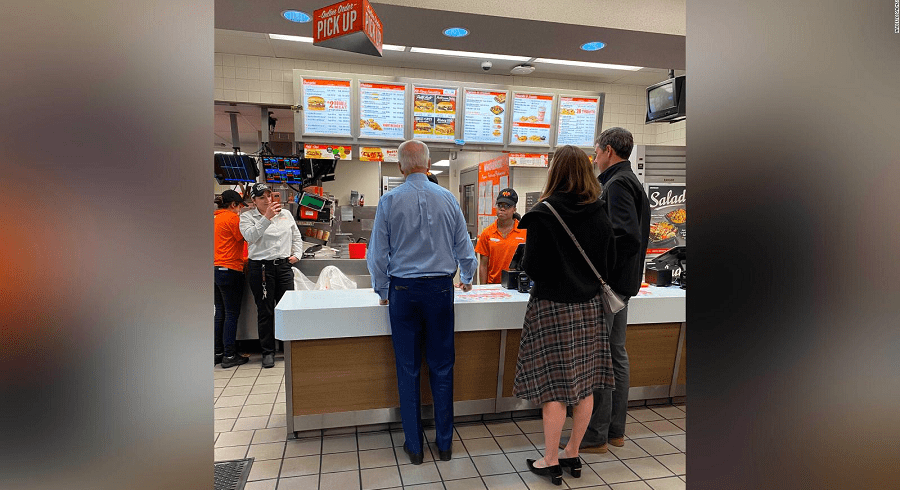 It was the eve of Super Tuesday and Joe Biden was having the greatest day of his campaign.

And then he went to Whataburger.

As O’Rourke’s endorsement marked the end of Biden’s rally in Dallas, he promised to “treat Joe and Jill right,” by taking them “to a world-class meal tonight — there is a Whataburger less than half a mile from here.”

Biden loved the idea, and closed the event by saying, “I’m going to Whataburger right now.”

Most of the audience members did not take it seriously. But the duo indeed walked into the burger joint minutes after leaving the stage, joined by O’Rourke’s wife Amy.

Patrons were surprised as Biden greeted them, “Hey, folks. How are you?”

Sofia, a seven-year old from Broken Bow, Oklahoma, asked Joe Biden and Beto O’Rourke for autographs at Whataburger on Monday night. They both wrote her notes.

Biden: “You are a lovely, bright young lady.”

O’Rourke: “I am expecting great things from you.” pic.twitter.com/qEvn6JImTm

The two shook nearly every hand in the building before they got to order. They even signed french fry containers before leaving.

While the endorsements from Buttigieg and Klobuchar were expected before Biden’s event, O’Rourke’s endorsement was an unexpected addition.

At the rally, O’Rourke had called President Donald Trump an “existential threat” in comparison to Biden, who he described as “decent, kind, caring, and empathetic.”

After the stop at Whataburger, O’Rourke told CNN that he decided to support Biden late last week upon seeing a clip of Biden taking the time to connect with a pastor who lost his wife in the 2015 church shooting in Charleston, South Carolina.

O’Rourke said he was “struck by his ability to connect with that one person, and then with all of us, simultaneously. I feel that’s what this country needs. We need to heal after a very divided time. We need to come together, and we need someone who can speak to us in that way and lead in that way.”

O’Rourke said he took a lot of time to make an informed decision on who to vote for, that he felt “a huge relief” when he realized Biden was “the guy for us.”

When O’Rourke informed his oldest son, Ulysses, he was encouraged to endorse and “do everything you can to help him.”

When O’Rourke told Biden about this, the former vice president called Ulysses and left a message expressing his heartfelt gratitude. Dad allegedly killed by own son he kidnapped 11 years ago Man Loses Fingers Due to COVID-19